skip to main | skip to sidebar

Our Friend Patrick Merrill Has Passed 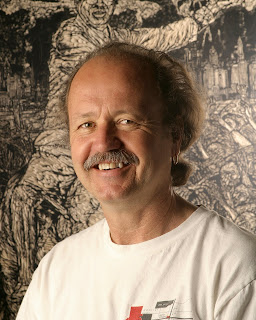 Patrick Merrill was an artist, master printer, curator, loving husband and friend. Merrill was a practicing artist and had been exhibiting since 1972. He was best known for work in two printmaking media: dramatic large-scale black and white woodcuts and densely colored intaglio and relief prints. Although in the early years he occasionally did abstract art, his mature work focused on the figure. He was concerned with psychology and politics, and developed the intersection between the two. As noted in the upcoming book, he often employed religious iconography to convey secular themes. He has had numerous solo exhibitions and was included in significant group shows in both national and international galleries and museums. In addition to a large number of private collections Merrill’s art is included in the permanent collections of regional, national and international art institutions.

After graduation he worked in various printmaking businesses developing the skills to start his own fine art printing business. In 1981 Merrill established “Pat Merrill Fine Art Prints” in downtown Long Beach and over the years relocated and expanded the business three times, moving to Garden Grove, Montclair and finally Covina. It was a fully equipped printmaking facility specializing in etchings, woodcuts, collographs and monoprints. Merrill made prints with professional artists as well as emerging artists; he also developed commercial prints for a national distributor. In his last years he enjoyed doing focused print workshops. Merrill loved to use new printmaking techniques and developed a process with master ceramicist Stephen Horn by which paper lithography could be used to print oxides directly to the clay before firing resulting in a beautiful integration of the two mediums. Merrill was also a respected member of the Los Angeles Printmaking society winning the Foundation Award for one of his large woodcuts in their 2009 national exhibition.

1981 was also the first year of his sobriety from substance abuse that began during the 1960s but was exasperated by his need to self-medicate after the trauma of the Vietnam War. His struggle to recover became a major topic of his work in the 1980s and into the 1990s. He maintained his sobriety until four months before his death, and despite the need to suppress the pain of the cancer it was intensely difficult for Merrill to return to drugs.

Merrill attended California State University Fullerton from 1991-94 where he completed his Masters in Fine Arts degree. Patrick married Debra R. Winters in 1996, an art historian and staff member at California State University Fullerton. They researched many projects together, traveled whenever possible, went to many art exhibitions, and enjoyed spending time with their family and friends. They lived in joy in Diamond Bar.

He served as the Publicity and Exhibition Director for the Orange County Center for Contemporary Art from 1990 to 2000. During these years Merrill curated over 40 exhibitions both inside and outside the Center. He was instrumental in the expansion of the center to a 6600 sq ft in the Artist’s Village in downtown Santa Ana. In 1997 Merrill added to his responsibilities when he accepted the position of Director and Curator for the W. Keith and Janet Kellogg University Art Gallery at California Polytechnic University Pomona. While at the Kellogg Art Gallery, Merrill developed the annual competition, Ink & Clay, from a local to a major national competition. Purchase and cash awards were increased and the exhibitions were documented with virtual Web catalogs. Among the many exhibitions he curated until 2009 were those that were curated around cultural and social issues such as Fragmented Bodies, Cultural Critics and Represent. He also brought contemporary Chinese art to the Inland Empire before Chinese art became trendy. He collaborated with co-curators on many exhibitions such as Ephemeral and Accretion. East in Eden was an NEA funded exhibition and examined and interpreted the Pomona Valley through the eyes of 24 contemporary artists. Merrill also curated exhibitions of the functional arts such as design, furniture and quilts. He supported special exhibitions on campus such as those of the Windows between Worlds organization. While he was director the gallery doubled its size and received two major bequests.

Merrill was a long time supporter of grass-roots organizations and was well known for his institutional volunteerism as well as his willingness to help individuals. He helped to organize the T.H. Pendergast California Parole Museum and curated all the exhibitions from 2001 to 2010. Patrick believed in the possibility of change that is a fundamental aspect of the rehabilitation that parole fosters. The most significant was a meticulously researched exhibit on the First 100 Years of Parole that was installed both at the museum and in the public hallways in front of the Governor’s office. Merrill was also a consulting curator since 2005 for the OT Gallery in Old Town Tustin that focused on artist’s prints.

After his diagnosis with stage IV cancer friends Garland Kirkpatrick and Jade Jewett proposed a book chronically his art. Artists and writers Suvan Geer, Sheila Pinkel, John O’Brien and art historians Joanna Roche, Ruth Capelle and Debra Winters contributed essays. Hundreds of family, friends and artists made gifts to the printing fund and it started to become clear just how many people’s lives that Patrick had touched. The downtown Pomona arts community organized an auction/ birthday party supporting the book in December 2009. The last year and a half of Patrick’s life was hard because of his illness as well as the effects radiation and chemotherapy; however, the time was also rich as he watched the book project progress. He was able to visit with many friends and family during this time, some of who helped him with the inventory, organization and storage of his remaining artwork. He made new friends among his care giving staff during his treatment by the Southern California Kaiser group. He succumbed to colon cancer on August 31st 2010, sadly before the opening of two major solo exhibitions at the College of the Canyons (opening October 24th) and Cal State Fullerton’s Begovich Gallery (opening October 30th). The College of the Canyons exhibition, Conjunction: intaglio & relief, will feature Patrick’s rich intaglio and relief prints that he produced starting in the late 1980s until the end of his life. The CSU Fullerton exhibition, Patrick Merrill: revelation, will focus on the monumental prints in the apocalypse series, which he is well known for and that he started in the year 2004 and continued thru 2009. His last print the Alpha and Omega diptych was finished just one week before his death will be unveiled at this exhibition. The title of the upcoming book is also Patrick Merrill: revelation however the material covered is more representative of his entire life’s work.

He is survived by his wife Debra R. Winters, as well as his parents Edward and Genevieve Merrill of Washington State, three brothers Michael Merrill of Long Beach, Doug Merrill of Driggs, Idaho, Danny Merrill and sister Christine Williams of Enumclaw Washington.

A memorial will be organized in conjunction with the CSU Fullerton exhibition and will be open to the public. At this time no information is available on its exact location nor the time.

Some people come into our lives and quickly go. Some stay for awhile and leave footprints on our hearts. And we are never ever the same.